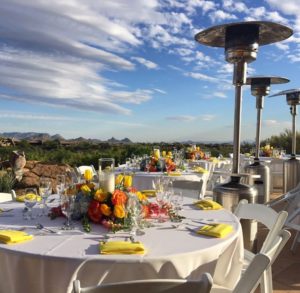 Why choose Creations in Cuisine for your next corporate event? There are a number of reasons we’ve earned our reputation as one of Chandler’s best caterers. No event is too large or too small and we work with every client to ensure their event is a total success.

What do guests talk about most at any catered event? The food. That’s why we take great pride in preparing scrumptious food items that will ensure everyone raves about your event. 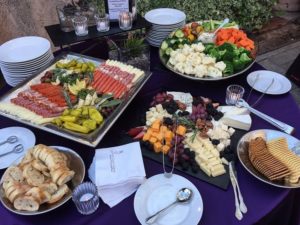 Menu diversity. Our Chandler corporate catering professionals offer everything from breakfast to hot meal and appetizer selections in many different themes. You can take a look at our menu online for ideas. Easy order menu items to take the stress out of meal planning. Flexible delivery hours, early morning breakfast meetings, lunches and corporate cocktail hour.

Creative menu items, not just sandwiches and cold food preparations. All Chandler corporate catering orders are set and ready to eat within 15 minutes prior to your service time. Menu customization to meet the needs or those with dietary restrictions and special menu requests.

If you have questions about catering your next event, contact us today.

The food you eat should energize your mind and body. Food is fuel, so why not fuel your workforce with delicious menu items made from the freshest ingredients. We will eagerly customize the perfect Chandler corporate lunch catering menu while acknowledging any dietary request. After fine-tuning your selections, we will deliver a lunch that will keep employees productive and content. Give us a call and customize your own corporate lunch menu today.

Chandler serves as suburb of Metro Phoenix. This is not surprising as Phoenix is located west of the city. Other areas surrounding Chandler are Tempe, Mesa, and Gilbert.
Aside from that, you will find the Gila River Indian Community just south of the city. According to the U.S. Census Bureau report, in 2017, the city’s population was around 253,458 residents.

Chandler’s history started in 1891 when a veterinary surgeon lived on a property south of Mesa. In less than a decade, the doctor was able to gain 18,000 acres of land, and this prompted him to a small town called Chandler Ranch.

On May 17, 1912, Chandler Ranch was officially a town. On its first year, the town already had a high school. In 1913, Chandler Ranch further expanded because of the Hotel San Marcos. It was the town’s – and the state of Arizona’s – first golf resort. In 1920, it officially became the city of Chandler.

However, the upward progress halted because of the Great Depression. By 1941, Chandler became the headquarters of the Williams Air Force Base. It was an active United States Air Force base until it was shut down in 1993.

In 1950, Chandler only had 3,800 residents. The numbers went up to 30,000 by the 1980s. Since then, Chandler became known as the suburb of the Phoenix MSA. The city’s rapid growth was due to the emergence of tech companies like Intel, Microchip, and Motorola.

During the 1990s, Chandler’s rise did not show signs of stopping. There were roughly 100,000 houses sprouted within the city limits. The population in recent years were reported to be over 238,000 residents. In fact, the 2018 population estimate was already 257,165.

With over 210,000 visiting the Chandler Center for the Arts yearly, the Center strives to offer numerous activities such as art exhibitions, dance performances, and other forms of entertainment. The CCA has 3 theaters, a recital hall, an exhibition hall, and a main auditorium.

In 2010, Chandler was recognized as an All-America City and it was the only city in Arizona that was awarded that year. In 2012, Chandler celebrated its centennial year. Several events were prepared by the city to commemorate the day Dr. Alexander John Chandler founded Chandler Ranch.

The U.S. Census Bureau reported that Chandler occupies a land area of 57.9 square miles. Only 0.17% of the city is made up of water. Sadly, the city cannot anymore expand its limits as other massive cities, such as Tempe, Mesa, and Phoenix, are located near it.

To this day, Chandler’s economy is sustained by the tech giant Intel. Indeed, the computer company played a significant role in Chandler’s economic growth. From 2003 to the present time, investments of more than $ 3 billion were constructed along the freeways near Chandler.